Haverford School’s Kelly is listed among top goalies in nation by Lax.com 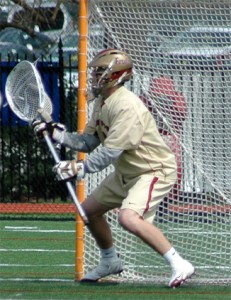 Haverford School's Conor Kelly was listed among the top goalies in the country by lax.com

For the second time in the past few weeks, Haverford School’s Conor Kelly has been listed as one of the top senior goalies in the nation by a major media outlet.

Kelly, who helped lead the Fords to a share of the the Inter-Ac League championship last year, was listed among the the top seven goalies in the lax.com “Class of 2011 Best High School Players in the Nation” feature.

Kelly, who has committed to NCAA Division I runner-up Notre Dame, was a First Team Inter-Ac League pick who played for the Philly team at the Under Armour Underclassmen Games.

Kelly, who helped the Fords finish 20-4 and win the Inter-Ac Invitational, was named as the No. 3 goalie in ESPN Rise’s “On The Rise” feature last month. Recently, he was listed as the No. 43 Rising Senior Young Gun by Inside Lacrosse.

This entry was posted on Friday, September 10th, 2010 at 9:09 pm and is filed under Boy's/Men's, High School. You can follow any responses to this entry through the RSS 2.0 feed.